Octagonal outline of Tower of the Sun readily visible on Google maps. Located near the intersection of 4th Street and Avenue C, Treasure Island (Job Corps guard shack is the small, black-roofed rectangular building near the center of the octagon) 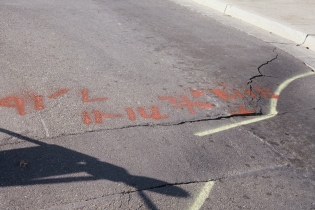 In 1989, just before the 50th anniversary of the opening of the Golden Gate International Exposition, the Loma Prieta Earthquake (6.9) struck the San Francisco Bay Area, hitting areas of landfill particularly hard. In fact, one of the areas that sustained the most serious damage was San Francisco’s Marina district—-created, like Treasure Island, for a world’s fair—-the Panama-Pacific International Exposition of 1915. The Marina district is almost exclusively residential housing with a high population density, all built on landfill. Treasure Island, too, was constructed completely from landfill, and it did sustain some damage, but nothing comparable to the devastation that struck the Marina District.

In fact, something rather miraculous happened on Treasure Island. As a consequence of liquefaction, parts of buildings appeared on the island that had not been seen in approximately 48 years. What is liquefaction?

A process by which water-saturated sediment temporarily loses strength and acts as a fluid, like when you wiggle your toes in the wet sand near the water at the beach. This effect can be caused by earthquake shaking. [http://earthquake.usgs.gov/learn/glossary/]

On Treasure Island, liquefaction caused the foundations of long-since demolished GGIE buildings to appear to pop up through the surface. What really happened, though, is that the surface of the island sank as soft underlayers of landfill were compressed by the shaking. The most dramatic—-and exciting—-instance of this, for GGIE aficionados, was the “rising” of the Tower of the Sun, the 410-foot Gothic-style monolith, designed by Arthur Brown. As the asphalt covering the area around the former tower sank, the tower’s “roots” were exposed. Large cracks in the asphalt outlined its octagonal shape, and the nipped-off tops of a few i-beams were also revealed.

This phenomenon enabled Treasure Island watchers definitively to identify the location of the Tower, which was removed by the Navy shortly after it took possession of the island in 1940.

The surface settled approximately six inches around the buried foundation, near the intersection of Fourth Street and Avenue C. Navy engineers immediately surrounded the area with caution signs and sawhorses and painted white lines around the elevated and cracked areas. Within a few weeks, the elevated areas had been flattened and the paint removed.

Even now, however, the outline of the tower is visible, as the Navy’s patch of cracked asphalt is easily visible from the air, as in the Google map shown in the gallery above.