Court of Pacifica, looking south to Fountain of Western Waters (foreground), Promenade of the Seven Seas, to Tower of the Sun–photo by Herbert “Bud” Stewart 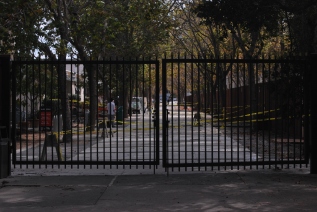 (Outside of fence) Job Corps corridor, looking south from near 9th Street. This vista was formerly the Promenade of the Seven Seas–Tower of the Sun was at the end of this corridor.

(Inside of fence) Job Corps corridor, looking south from near 9th Street, former “Promenade of the Seven Seas.” Tower of the Sun was at the end of this corridor. “Peacemakers” dimensional mural by Esther, Helen and Margaret Bruton, located on the west side of the Court of Pacifica, just above the “Northwest Passage” entrance to the GGIE. Fountain of Western Waters in foreground. In this photo, statue of Pacifica would have been to the right (north), Tower of the Sun to the left (south).

Court of Pacifica looking south from Pacifica waterfall, Fountain of Western Waters, Promenade of the Seven Seas, to Tower of the Sun

Look for a circular design on the left side of this map, a little above the middle, at the end of Avenue C–that is the original location of the Fountain of Western Waters (and later, the Pacific Basin Fountain). This location was originally the Court of Pacifica. The Navy built 9th Street right through the court, but (fortunately), designed the street to go around the fountain. This map of Naval Station Treasure island has been cropped to provide details of the area where the Court of Pacifica was located. Many many thanks to Bruce Gifford for this map!

I first came to Treasure Island in . . . 1988 or 1989? Wish I could recapture the exact date but it seems to be long gone. It was a walking tour sponsored by the Art Deco Society of California. To make a long story short (I will tell the long version later), we met with the curator of the Treasure Island Museum, Douglas Brookes, who walked with us up a long north-west outdoor corridor which I now know to be Avenue C. I call it a “corridor” rather than a street because it was narrow and lined with buildings. All of the buildings were flat and square, yellowish or dun in color, fairly flat and dull. The place wasn’t sparkling and efficient looking, which is how I had always imagined Navy bases. It looked dull and depressing.

At the end of the long, narrow corridor was an amazing sight–a still-splendid (but somewhat dilapidated) terra cotta pool made of large tiles, representing a colorful, amazingly detailed, three dimensional oval map of the Pacific Basin. It was fairly recognizable for what it was, but we really needed Douglas to explain it to us. This map was contained by a wall of glazed tiles the color of a swimming pool. Very pretty! The pool was on a sunken plaza, about eight feet below grade, surrounded by a weedy lawn. Surrounding the pool were eight sculptures, about twice life-size, of people engaged in various activities–playing musical instruments, lounging on a beach, grinding corn, ice-fishing. In four symmetrical locations around the plaza were sets of stairs, about eight stairs each, eight feet wide. At the top of the stairs and flanking each set of stairs at grade level were four pairs sculptures. These sculptures were larger and represented people in more static poses–sitting on a llama, kneeling, reclining. Douglas explained to us that these figures, which were made of cast stone, an arty euphemism for cement, represented peoples of the Pacific Basin, and that the fountain was the Fountain of the Pacific by an artist named Antonio Sotomayor. These amazing pieces were the remains of the Court of Pacifica at the Golden Gate International Exposition of 1939-1940.

I will show pictures of the fountain and statues in a later post. Right now I just want to show you some images of what the Court of Pacifica looked like in 1939-1940, and what it looks like now. I have three sets of “then and now” images. The “now” images could be better and I will replace them soon. But I think you will get the idea. Currently, the Court of Pacifica is a parking lot, part of 9th Street, and a bit of a couple of residences.

I have two images of the Court of Pacifica looking south–showing the original fountain from the court, which was called the Fountain of Western Waters (it was removed by the Navy and replaced by the Pacific Basin Fountain–more on that later). The original fountain was four round/scalloped graduated tiers, with water flowing from the top tier to the bottom. Four sculptures were located on the top tier of the fountain, and eight were located on the bottom tier. Both images show the Tower of the Sun. At the location of the Tower of the Sun now is a small shack at the southern entrance to the Job Corps, quite sad really (as what part of this story isn’t–but somehow the shack just gets me). The shack is where the guard sits to keep people from trespassing on the Job Corps property. But we can’t see the shack because so much foliage has grown up along the corridor (which is nice really), and anyway, it is only about ten feet high . . . whereas the Tower of the Sun was 410 feet.

How do we know exactly where the Tower of the Sun was? It is one of few unmovable markers by which we can measure where things were at the fair. Treasure Island liquifacted to varying depths during the Loma Prieta Earthquake, and the foundations of the Tower of the Sun materialized for the first time since it was torn down. I was able to get over there before the Navy removed the foundations and took enough pictures to be able to locate it in the future. There are also a couple of spots on the asphalt where you can see an angle of the Tower’s octagon. So we do know precisely where the Tower of the Sun was.

Also in the gallery is a photo looking west in the Court of Pacifica. During the years of the fair, the western wall of the Court was also the northwest entrance/exit of the fair, called “The Northwest Passage.” Guests entered the fair right under the wonderful “Peacemakers” mural by the Bruton sisters–Esther, Margaret and Helen. Now, if you look west from the formelocation of the court of Pacifica, you see alight standards, the Bay, and the Golden Gate Bridge.